Home » Blog » Why DIY Home Bloggers Should Work with Hometalk

If you want to know how to use Hometalk in order to make money as a blogger and/or DIYer, then you will want to read this post!

I recently posted about what Hometalk is and how you can use it to earn thousands of page views for your blog, as well as earn subscribers and make money from the traffic you receive (go ahead and read that post first if you are unfamiliar with Hometalk).

If you post about the following topics on your website, then look into making money with Hometalk!

There are three main ways you can make money with Hometalk directly:

How to Make Money with Hometalk’s Pinterest Influence Program

This is a fairly new program and one that I am in love with!

Launched in June 2017 directly to Hometalk Bloggers (and not published on their site or in their support forum that I can find), it’s a program that Hometalk Bloggers can apply to be apart of. However, priority for joining will be given to Hometalk Bloggers who post actively and partake in their direct traffic program. But, any Hometalk blogger, regardless of the size of your Pinterest following size, is eligible for the program!

The Hometalk Pinterest Influence Program is set up to reward Pinterest Influencers (Pinterest users) for driving traffic to Hometalk by pinning specific Hometalk-created pins. They pay you for driving clicks from your pins to their site. They offer a $8 CPM, meaning for every 1000 clicks you earn $8! Get the right pins on the right boards and you can make at least a few dollars every single day.

This program is in compliance with the Pinterest pinning policies (they flew out and made sure). In fact, Pinterest recently named Hometalk as a prime example of a great affiliate program to use on Pinterest.

Hometalk also recommends being transparent on your pins and follow FTC guidelines for sharing paid content, but how you do so is up to you.

If you want your Hometalk posts to be featured in the Pinterest library, fill out this form.

Everyday Hometalk uploads three (or more) new pins to the Pinterest library (and send you an email about the pins being added as well as any updates about the program). They also offer a search bar so you can search for content that does well for you on Pinterest.

Note that most of the pins they create are not what many bloggers consider “pretty pins” or pins stylized with bright, clear pictures and text. Some aren’t even vertical and most don’t even have text! But, know this is intentional. Hometalk ran several experiments with “designed” pins versus their “in-process” images and the latter leads to more clicks. Clicks are what they are after (and what they are paying you for) not repins or engagement! 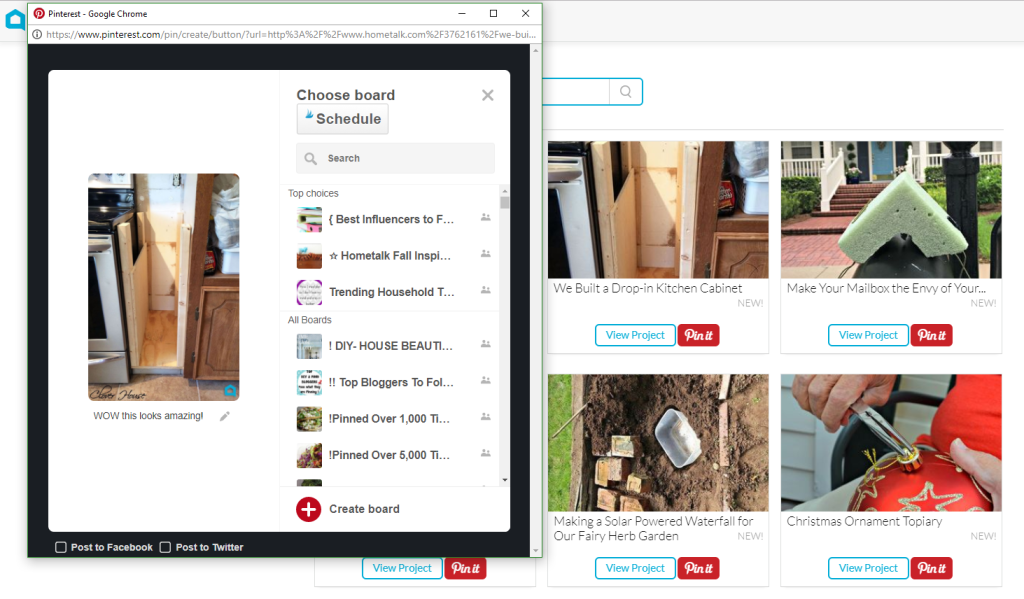 If your personal Pinterest branding doesn’t jive with these “ugly” pins then this may not be the right program for you, but if you are open to non-standard “pin-images” as part of your pinning strategy and want to monetize your Pinterest account, then this likely a great program for you!

Browse or search through the pins they’ve provided to find pins that you know will do well on your personal and groups boards to which you belong. And start pinning!

When you pin from the Hometalk Pinterest Library, they provide a pin description already, but most are pretty click-bait like… things like “WOW this looks amazing!” or “This is the coolest thing you’ll see all day!” I tend to leave those there, but then also add in related keywords so people searching on Pinterest will find these pins.

To make sure I’m adding the right keywords, I always click through to the project page on Hometalk and see what materials are used, what the end product is, and so on, and then put those in my pin description.

Once I pin something from the Hometalk Pinterest Library, I go directly to that pin in my account and schedule interval reshares of the pin via [eafl id=”9073″ name=”Tailwind” text=”Tailwind”] to any all applicable group boards and personal boards, spaced about a day apart.

To help you evaluate what pins are doing well, and which aren’t, simply use the Hometalk dashboard reporting. Repin content that has already done well after it’s been a little while since they went through your circuit of boards by simply clicking the “Pin It” button in your dashboard. 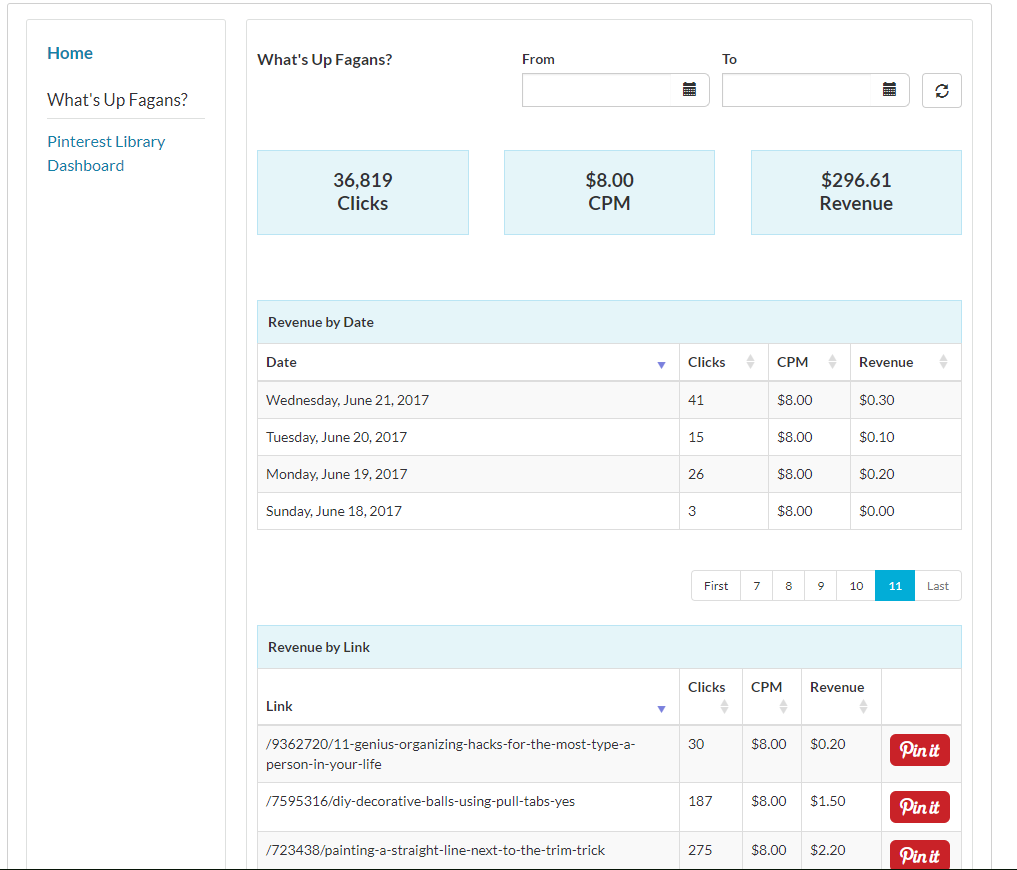 How do you get paid from the Hometalk Pinterest Program?

At the beginning of every month, Hometalk will send you an email with a statement about how much you earned through the program. You need to send them a Paypal invoice for that amount by the 15th. You will then be paid around the 20th of the month for the previous month’s earnings.

You will earn more money from the program the more pins you share. There are no limits as to how much you can pin from the library each day nor limits on how much you can earn. They are always adding fresh new content too so you don’t have to keep resharing the same pins to your audience.

And that’s it! If you are already pinning content from others regularly, it’s very easy, and quick to schedule some pins from Hometalk and get paid for them right away! I love being able to monetize my Pinterest account in such a direct way! No having to make affiliate sales!

Their vidoes garner lots of engagement, views, new followers, and share great new tutorials in real time with their audience. And YOU can be the presenter in this videos!

Launched in September 2016, Hometalk has welcomed all bloggers to reach out and pitch your Hometalk posts for a Live by emailing live@hometalk.com. Be sure to include a link to the Hometalk post you’d like to demo live. Note that everything you want to demo Live must be on Hometalk.

Hometalk also regularly identifies posts on Hometalk that would be good for a potential Hometalk Live and reaches out to the author directly.

Compensation for your first Live is $75 and full training, and compensation for every Live thereafter is $150. Know that Hometalk Live featuring products for sale by small businesses, brands, and stockists are not compensated.

The benefit of doing Hometalk Lives are that they drive exposure, reach, and new subscribers for you, the host. Your Facebook page is tagged prominently in your Facebook live description and you’ll have the opportunity to invite readers to follow you directly on your blog during your live broadcast!


Plus, your videos are shared to Hometalk’s Youtube channel and added to your Hometalk posts, with light editing, and when applicable turned into a one-minute shortened version for the Hometalk FB page. 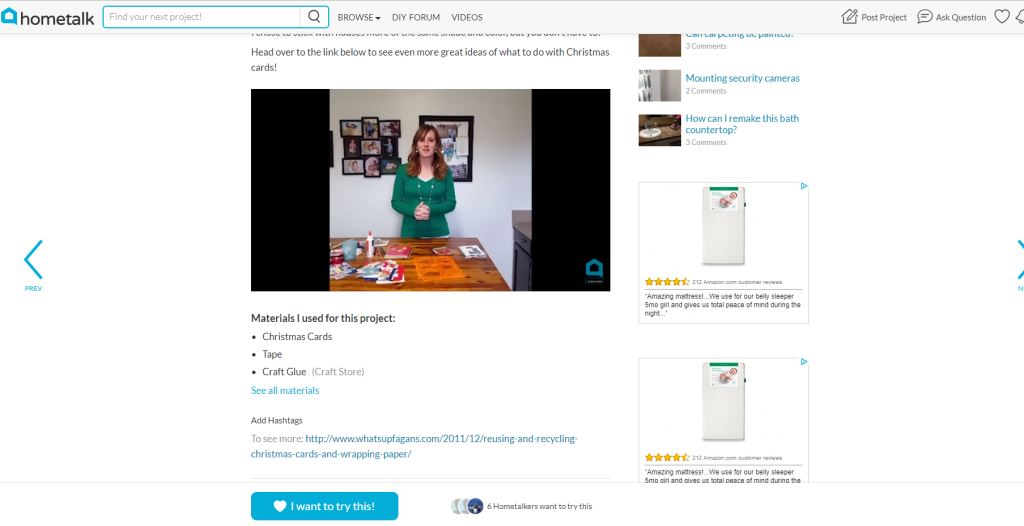 I have done six Facebook Lives over the last year. Assuming your first Live goes well, they will likely contact you about doing another right after you are done with your first, and from every future Live you do.

Here are some important things to know about doing Lives for Hometalk:

Once you get started doing Lives for Hometalk, and they decide they like you (and their audience likes you), you have the opportunity to do regular demonstrations for them! For a while I was doing one a month, and once even did two Lives in two weeks! They have multiple time slots available every single day.

Plus, if you are available to go Live last minute, they offer additional compensation for being “on-call.”

If you love teaching people to DIY through video, this might be your chance. Participating bloggers send Hometalk original footage, so they can edit it, and get paid! They feature these videos on your corresponding Hometalk posts and on Hometalk’s social channels.

Here is an example of a video you could make together (and has 113 million views and over 1.8 million shares!).

Compensation for approved footage is $75 plus training for your first video and every video after that is $150. Your blog will be credited in the video and you will be able to use the video on your blog and social channels as well.

How to apply: Hometalk welcomes all bloggers with experience in video to reach out and pitch your ideas. To be considered, please email kara@hometalk.com include an example of a past video you’ve done and a link to your Hometalk profile.

I have not personally participated in this program (creating short videos are not my strong suit) but do know that Hometalk has had several videos receive millions and millions of views on their Facebook page. I can only imagine that with the credit to your site, you’d also see additional Facebook followers! Plus, they’re essentially editing video for you to use yourself on your channels, which I think is pretty amazing!

I hope that as you look for ways to monetize your blog you’ll think about how to monetize with Hometalk! They offer some really great compensation opportunities for bloggers, videographers, personalities, and DIY crafters to make money from Hometalk!